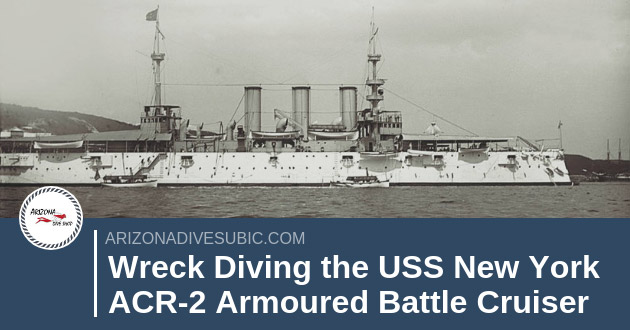 Are you looking for information on Wreck Diving the USS New York ACR-2 Armoured Battle Cruiser in Subic Bay Philippines?

If there is a single shipwreck that is synonymous with diving in the Philippines it must be the USS New York ACR-2 Armoured Battle Cruiser. Coming in at 115m long and fitted with forward and aft twin 8-inch cannons and propeller blades that tower over a diver, this is truly a remarkable wreck.

In the fall of 1888, the United States Congress commanded the purchase of an armoured battle cruiser of approximately 7,500 tonnes. The ship would be integral to the re-birth of the US Navy and a symbol of power and grace. For almost 10 years the USS New York would be the flagship. Regardless of which admiral was at the helm or which new ships entered service the flagship was to continue on with the New York as a sign of naval supremacy. 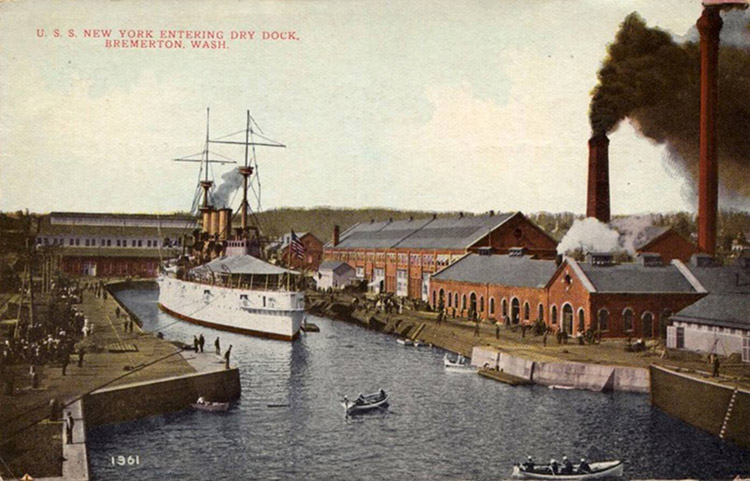 But for what reason was this one ship so appreciated, to be made an almost permanent flagship?

This wasn’t the first modern steel armoured warship to be ordered for the American Navy. To the contrary, the design of the USS Maine and USS Texas came much earlier indeed. However, those two were based on British designs and were widely regarded as nothing more than second-rate vessels, clearly inferior to what was being built in Europe. The US Navy demanded a vessel that was far superior to either the current British or French vessels, the latter considered the current benchmark.

Whilst the contract for her construction was signed in 1888, the build time was a long one. As of 1890, there was still no commencement works as the Navy was still unsure of exactly the ship they wanted.

The initial design was an under-gunned vessel with single 8-inch gun turrets fore and aft and ten 5-inch guns organized in six single turrets and four firing through ports. It was clearly another second-rate effort. Fortunately, the uninspired design of 6,350 tons and 19-knot speed was rejected. The second attempt produced a much more satisfactory goal, a cruiser of 8,100 tons with a 20-knot speed and armed with six 8-inch guns. William Cramp of Philadelphia won the contract by bidding $15,000 less than the only other bid of $3,000,000 from Union Ironworks of San Francisco. The high freeboard slab-sided hull, large funnels, and fighting masts gave her the appearance of a battleship, although she had much finer lines. Her design proved extraordinarily good in sea trials as well as in service. This fair lady was extremely stable and seaworthy.

The New York was the US designed, built and was the most powerful ship of her kind ever built… Indeed, she became the first of the new armoured ships to join the fleet, well ahead of the ill-equipped and slow constructed Maine and Texas. When this behemoth joined the fleet she became the first prima donna, an instant diva for the US Navy. 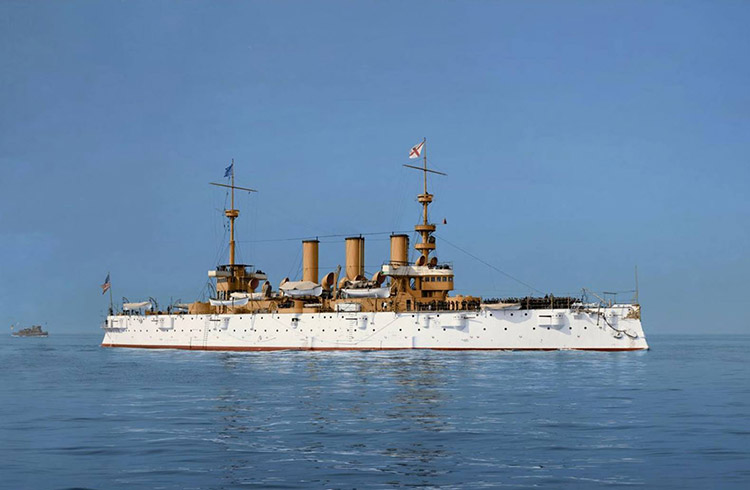 The USS New York ACR-2 was the fourth ship to be named New York, the previous 3 being;

1, USS New York (1776) A gundalow that was built on Chaplain Island and participated in the Battle of Valcour Island.

3, A screw sloop called Ontario was commissioned in 1863 and later named the USS New York in 1869 before being sold whilst on the stocks in 1888.

The USS New York ACR-2 was renamed on two occasions. The first being to the USS Saratoga in 1911 and then to the USS Rochester in 1917.

Since the ACR-2 was renamed the Saratoga the famous name has continued on with several other ships. These are;

5, USS New York BB-34 The first full battleship to carry the NY name was laid down in 1911, commissioned in 1914, served her navy in both world wars before being decommissioned in 1946. The BB-34 was used in both submerged and aerial atomic tests during the infamous Operation Crossroads at Bikini Atoll in 1946. She survived both and was later towed to Pearl Harbour to be used for target practice where she met her final demise following a large assault from ships and planes in 1948.

6, The USS New York City The only submarine to be named the NY, this was a nuclear fast attack Los Angeles class submarine which served from 1977 – 1997.

7, USS New York (LPD-21) This is the latest vessel to carry the namesake. She is in active service after being commissioned in November 2009. This San Antonio class amphibious transport dock was constructed partially from steel recovered from the Twin Towers Buildings that were destroyed in terrorist attacks in New York City in September 2001.

The USS New York ACR-2 entered service on the 1st August 1893 and upon the commencement of the Spanish – American War was sent to Cuba and bombarded Matanzas before joining other American ships in San Juan seeking the Spanish Fleet. The NY was carrying Admiral Simpson to a meeting with Major General William Shafter when the Spanish Fleet made their attempted getaway eventuating in total destruction on the entire fleet.

In 1901 the NY was transferred to the Asiatic fleet and immediately became the Flagship with active service in the Philippines, China, Hong Kong, Russia, Korea, and Japan.

In 1903 she was made the Flagship of the Pacific Squadron and sailed to Honduras and Mexico before returning to San Francisco joining a reception for President Theodore Roosevelt.

The ACR-2 was decommissioned 1905 for modernization and recommissioned in 1909. Much of the works completed were to improve her firepower and armouring.

The extensive re-fit included the replacement of the four main guns and turrets with four 8-inch Mark 6 guns in new Mark 12 turrets. The two torpedo tubes were completely removed along with the side 8-inch guns. The ship also had extensive improvements to armour plating around the barbettes, turret, and hull. The secondary armourment was also replaced with ten 5 inch Mark 6 and eight 3 inch guns. Twelve of her boilers were replaced and the funnels were extended to improve natural draft through the boilers. 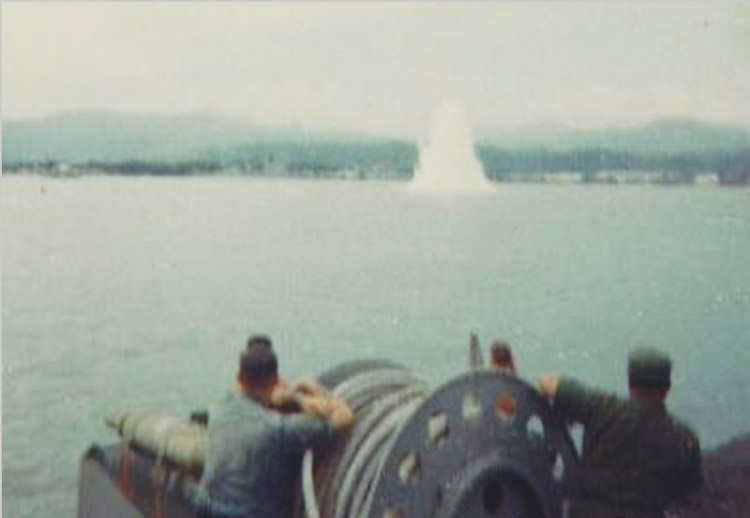 On the second and final refit, the two 5 inch and all 3 inch guns were removed, with the addition of two 3 inch anti-aircraft guns. Their was also a reduction of Horsepower to 7,700, due to a reduction of boilers to a total of four.

In July 1909 she joined the Armoured Cruiser Squadron and served in Atlantic and Gulf ports before being placed in fleet reserve later the same year.

New Missions With A New Name: The USS Rochester

Commissioned again in 1910 she steamed to Manila via Gibraltar and Singapore to once again join the Asiatic Fleet. It was during this deployment that she was renamed the USS Saratoga to make way for the BB-34. During this period she intercepted and captured a merchant ship transporting 32 German agents and several Americans attempting to dodge military drafting.

In 1917 she was renamed the USS Rochester and conducted escort runs from Paris to Chesapeake Bay. On her third trip, the ship was escorting convoy HM-58 when a German U-boat torpedoed the British ship “Atlantian”. The Rochester sped to her aid, however the stricken vessel sunk in under five minutes. 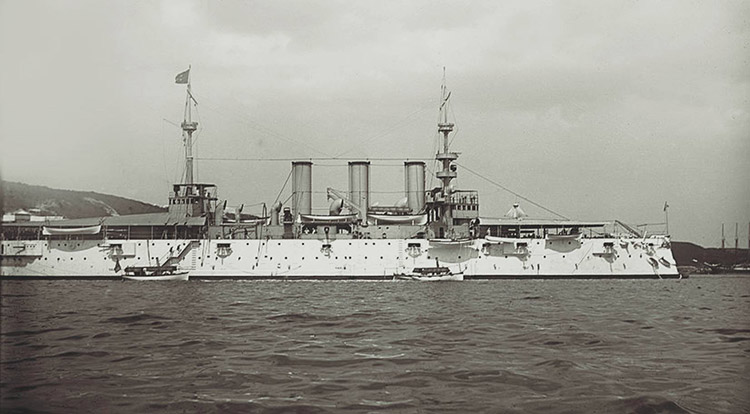 In 1925 the USS Rochester carried delegates to Chile to arbitrate the Tacna – Arica dispute and remained there until she headed for the troubled region of Nicaragua.

The Rochester also saw service in Haiti in 1930 where she transported the 1st Marine regiment to Port Au Prince to provide support after an uprising from bandits unhappy with the US Government.

She also provided much-needed assistance evacuating refugees after an earthquake rocked through Nicaragua in late 1931.

The final tour for this once powerful figurehead of US Navy supremacy was for service in the Asiatic fleet in early 1932. Arriving in Shanghai in April to join the fleet in June. She departed the Yangtze River, steaming to Cavite, Philippines. She was struck from the US Navy register on the 28th October 1938 and remained at the Olongapo Shipyard until she met her fateful demise when she was scuttled on Christmas Eve 1941 to prevent her falling into the hands of the Japanese Imperial Navy that were quickly overrunning the Subic Bay area.

The New York ACR-2 now rests silently in 28 metres of water. What was once a figurehead of Naval power she is now home to resident eagle rays, a school of juvenile yellowtail barracuda, octopus and a plethora of nudibranchs.

Whilst no two dives are the same, what a diver would likely experience goes something like this…………

Begin the dive descending down her anchor line and land on her starboard gunwhale toward the stern at 17 metres right above her twin rear 8 inch guns. Venturing toward the stern will find many entry points into her cavernous hull before sweeping around to the huge propeller. Venturing forward along the underside will see divers pass another entry point, the initial blast hole used to sink the vessel located along her mid ship bilge keel. 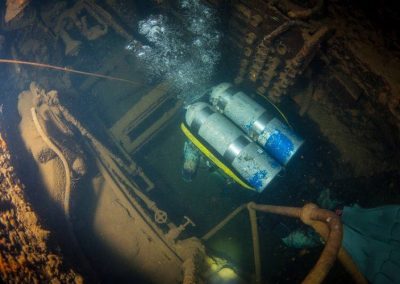 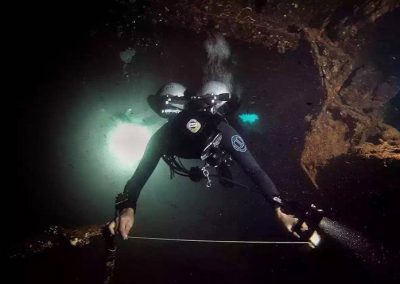 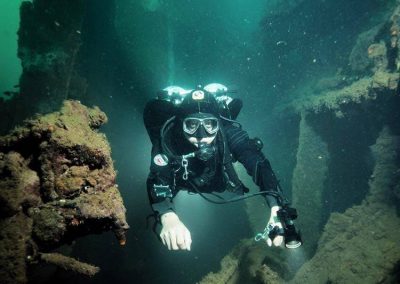 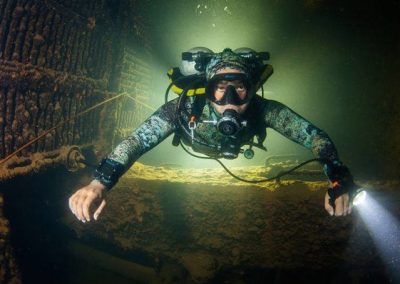 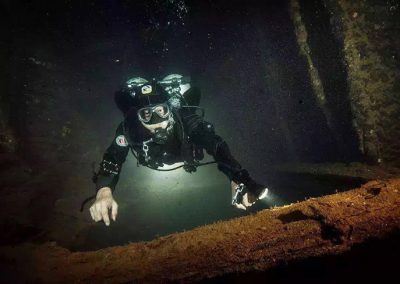 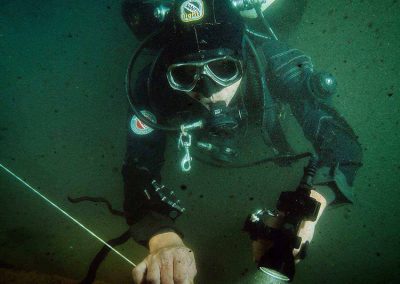 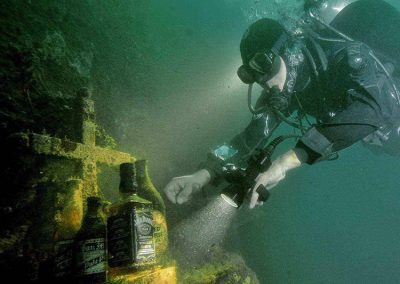 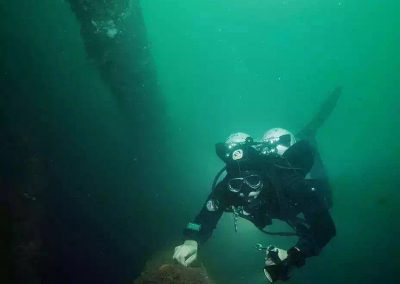 Continuing forward will find the “shovel” shape bow and an entry point right at the very point of the hull. Heading back along the top deck of the NY will introduce divers to the twin forward 8-inch guns and the line of gun positions along the gun deck that stretch the entire length of the vessel.

Heading back toward the stern a diver will notice a large area of broken steel. This “blast zone” was caused by US divers in 1967 to lower the bow to allow larger ships to pass with our obstruction.

Once past the blast zone, a diver will pass masts complete with crows nest and much of the superstructure. Right behind the superstructure is the rear 8 inch guns and of course the anchor line. This is a complete circumnavigation of the wreck but by no means a complete tour as there is simply so much to see…

Many divers want more from the wreck and wish to see inside the vessel to see more of the WW1 Battle Cruiser.

For recreational wreck certified divers, there are some amazing passages through the blast zone along with the long trip through the gun deck with an entry point right above the Admirals bathtub.

For technical wreck certified divers, this is truly a world class playground. She is quite simply a labyrinth with engines, boilers, pipework, gauges, ladders, and stairways that seem to lead forever. These areas are not for the faint of heart with many restrictions and silt to keep even the best-trained divers on point with even the smallest error with buoyancy or a fin kick directed in the wrong direction causing a loss of visibility. To get it right is a rush only a wreck aficionado will understand.

If you would like to schedule a dive on this amazing icon of US Naval history or would like to further your education with quality Wreck, Advanced Wreck and/or Technical Training then contact us at the following locations;

Also a big thanks to Mr. Sun Shaoguang for the awesome pics of divers on the New York!